Role of the European Union

There are approximately a million recognised refugees living in the European Union. They represent 7% of the world total and are equivalent to 0.2% of the population of the 28 member states.

But in a scenario where the number of people forcibly displaced continues to grow daily in the world, in 2017 only half the number of people applied for international protection in EU countries compared to the previous year. This can be explained by the fact that, with controls strengthened and border management transferred to neighbouring countries, a large proportion of these people have become trapped in their countries of origin and transit countries. 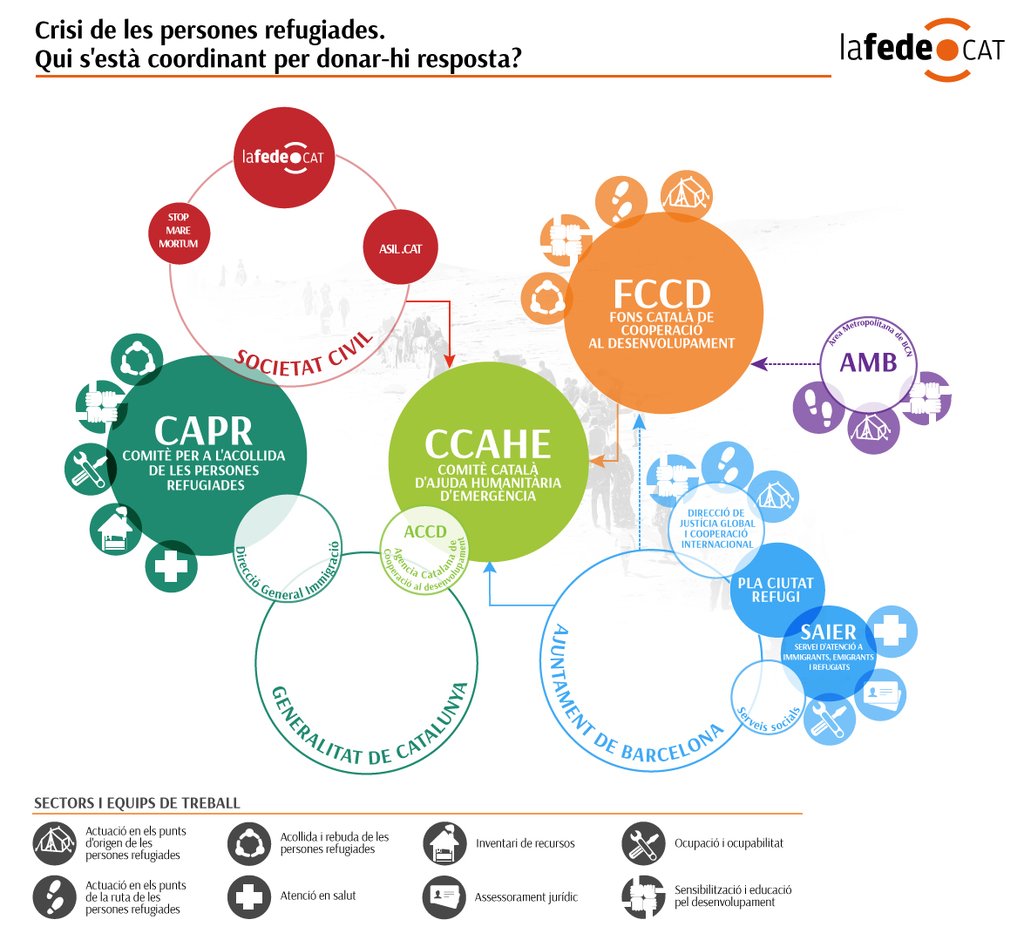 A computer graphic drawn up by LaFede.cat showing how various Catalan authorities, bodies and social organisations are working together in response to the refugee crisis.

The central government has sole jurisdiction for asylum in Spain but it has to exercise this in cooperation with other public authorities as it effects areas under the jurisdiction of regional and local authorities, such as health, education, employment, social services and the protection of minors.

Towns and cities are the ones that feel the impact of the arrival of displaced people and which have to care for and integrate them, though they have no powers under the reception policies and no funds to implement them.

In turn, local and regional authorities are responsible for ensuring the central government fulfils its international obligations, that it informs them about these obligations and coordinates with them to ensure the protection and reception processes are carried out with the best possible quality and with all rights guaranteed.

The number of refugees arriving in Catalonia has increased considerably in recent years, especially in Barcelona. A total of 786 people applied for asylum here in 2014, an increase of 62% on the previous year and a little more than 14% of the total for Spain.

During 2015, SAIER, the municipal service responsible for the care of immigrants and refugees, attended to nearly 1,400 people in Barcelona alone, four times the figure for 2012.

While waiting for concrete figures regarding Catalonia's participation in the refugee relocation programme, the Generalitat estimates that almost 5,000 refugees will arrive in the next two years, as a result of the European quotas or individually, on their own account. A number that would be equivalent to 0.06% of the total Catalan population.

Catalonia already has previous experience in emergency situations, having taken in people fleeing from the wars in the former Yugoslavia, first from Bosnia and Herzegovina, then from Kosovo, in the 1990s.

Since 2014, it has had the Plan for International Protection in Catalonia, although this has still not been implemented or even allocated a budget.

And, in September 2015, the Catalan government set up the Refugee Reception Committee, attached to the Catalan Ministry of Social Welfare and the Family, to define Catalonia's reception policy and coordinate the work of the various Catalan authorities with the social organisations.

The committee has created various working groups on health, resources, children and older people, employment and employability, development education and awareness-raising, and reception, with representatives from all the authorities and social organisations, such as the Catalan Committee of the UNHCR, CIEMEN, ACSAR, the Third Sector Committee, Lafede.cat and the Stop Mare Mortum Platform. Barcelona City Council is involved in several groups. It works in the reception group with the Catalan Refugee Aid Commission, the Red Cross, SICAR, ACCEM and the charity organisation Càritas.

The Catalan Development Cooperation Fund, which has 300 humanitarian Catalan municipalities under its umbrella, coordinates the action of local councils. This body has three main lines of action: support for refugees en route, support for municipalities on the refugee routes, and development education and awareness-raising in the municipalities.